We have this nook between the couch and 2 bookcases where the phone point is and a power point, the dogs really like to curl up there but they keep knocking the phone cable and that makes things fall so we needed to block the corner but still be able to get to the bookcase.

We had this 5 drawer storage cart on wheels in our office and it seemed like a perfect solution, we can easily wheel it out of the way to access the books on the bookcase and it is stopping the dogs from knocking the phone cable.
What to put in it so it wasn't wasted storage? 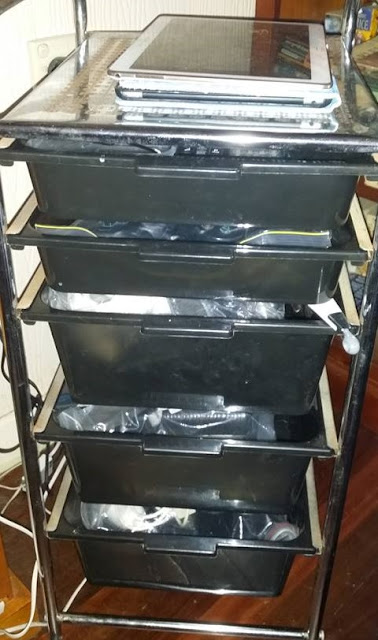 Currently our remotes were in a box on the bookcase taking up valuable book storage space and our Game Consul bits were in the cupboard the TV is above. 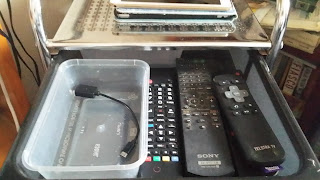 So remotes and chargers go in the top drawer, tablets and even laptops can be charged on the top of the cart. 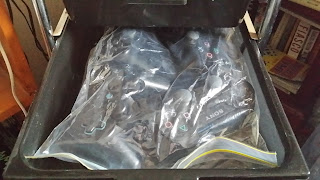 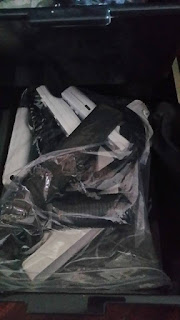 The bottom 3 drawers have Wii supplies.
Posted by dyspraxic organised scrapper at 07:45 No comments:

Email ThisBlogThis!Share to TwitterShare to FacebookShare to Pinterest
Labels: Organisation

On January 9th Jen Hall in the Project Life Australia group shared her layout that she created with mixed media cards she created herself.
They are absolutely beautiful.  Mine don't come close as with my hand issues I can't draw or write to a level that allows me to create anything close to her creation but I thought I would share what I created.  They are simple but I am happy with them.
They did take me a few days to make due to may hand but they were lots of fun, making 1 or 2 a day was a great way to get creative release without taking too much time from my day.
I grabbed a A3 sheet of 300gsm Watercolour paper (it is from a cheap pad and I have learnt my lesson, don't buy cheap watercolour paper, it is apparently in 2 layers and some of it split apart as it dries).  I cut it into 4 6x4 3 3x4 and the rest I cut into ATC size of 2.5x3.5, I think I got 5 of those.
I played on the 2.5x3.5 with backgrounds using my watercolours that the lovely Kerri in the Planner Community RAKed me.  I also used one to wipe off my brush on and it wound up with quiet fun colouring on it, I later used this to draw clouds & flowers on and fussy cut them out. 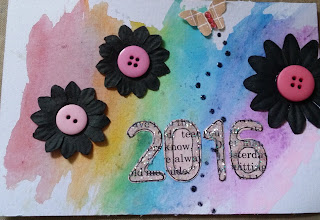 I used a stencil to draw the numbers for 2016 on a page from a damaged book.  Then I put clear stickles over where the numbers were.
Due to the poor quality of the paper it pilled in areas so I used a butterfly punched from wrapping paper and 3 paper flowers to cover the worst areas.
I created a butterfly trail with black Kindyglitz.  Pink buttonw for the flower centres.

I just played with backgrounds at first using watercolours on most and gelatos on one then I started thinking about those first days of 2016 and what happened in those days so as I added layers I used them to tell a story on 2 of the cards, this is the first of those cards. 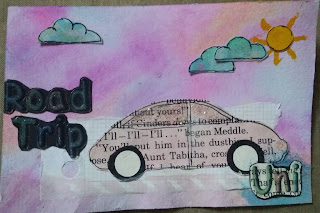 It is enhancing the telling of the main event of Jan 5th, my 18yr returning to her home 2hours away after recovering from a pushbike accident at home with us.
I have used a chevron stencil on the bottom, some paper from her old high school math book, created a car from a damaged book (clear stickles for the window and headlight, later changed the headlight to bling).
Letters are from the first stickers I bought as a scrapbooker over 10 years ago.

I am a big believer in using embellishments to enhance the telling of your story you are telling. 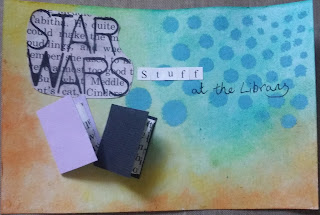 The next story I had to tell was the boys attending a activity at the local Library, the theme was Star Wars stuff.
I made mini books with a page from the damaged book and some cardstock.
Used a bubble stencil that I stenciled with some blue paint spray mixed with gesso. 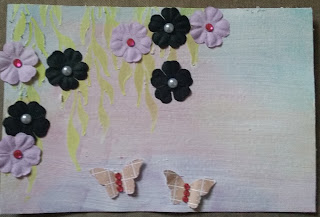 I used my gelatos on the background of this card but to the poor quality of the paper they wouldn't blend so I did a thin coat of gesso over this and loved it.
I mixed a lime green gelato with some gesso and stenciled the vine on the card.
The paper wasn't reacting well to so many layers and damage occurred so I covered this with little paper flowers and butterflies punched from wrapping paper. 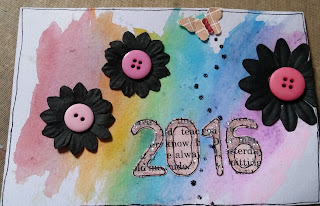 I decided they all needed to be outlined so they felt finished.

My 3x4 cards I didn't do much with, placed 3 1inch circled together with a brad and randomly snipped with scissors to create a flower, I doodled 3 flowers on my scrap piece of 2.5x3.5 that I had been wiping my brush on and fussy cut them out, I cut a section of my wet wipe I had been using to clean up and bunched it up to create a flower.
I used my first attempt at a rainbow on a 2.5x3.5 card to add it to a 3x4 piece of black cardstock to create another card. 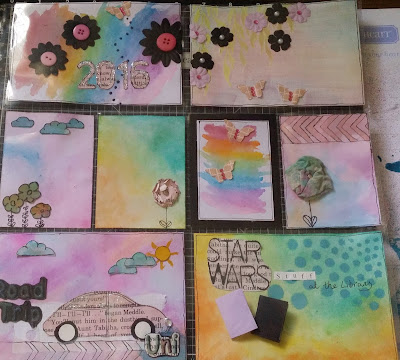 I place all my cards in a page protector and hung it on my wall by my desk until I had a chance to print photos.
A few days ago I decided to attempt keeping a journal, using my computer to type most of my journalling, the 2 bottom cards have wound up in my journal as fold outs.  I love them in there.

Posted by dyspraxic organised scrapper at 09:07 No comments: