When E asked to make his own cosplays that included sewing I said we would learn to sew together.  However due to limited space and not being able to lift the machine from storage whenever it is needed I decided to get a second hand Horn Sewing Cabinet and that we would keep all Cosplay making items that fit in it in there, it would be our Cosplay Cupboard. 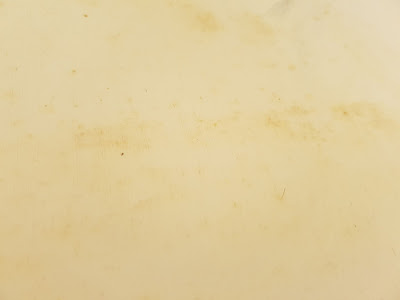 I found one for sale locally for a good price and arranged a friend to help pick it up.  It looked to be in great condition.  However, when we got it home and I was starting to put stuff in the compartments in the door, the sunlight coming in the big window in my craft/therapy/home school room showed up yellow mold on the doors.  So I spent some time cleaning the mold off, once I had removed the mold I set up the cabinet and thought that was it.

A few days later the laminate on the lids lifted off at the edges, in places and I noticed invisible tape was used to hold it in place   So I started thinking about how to fix them but hadn't really come up with a idea. A few weeks later as it got worse I thought I might need to see if I could get the laminate off and paint it and I was trying to think of a way to make it inspire creativity when I thought "Wouldn't it be great if it represented as much of the nerdy things we love as possible?  I wonder if I can find some damaged comics and cover it in comics for the various things we love."  I have never decoupaged before, unless you count the Grungy Fusion Marker Holder I did in June, however that was very different, it used thick scrapbooking paper which I was able to just glue down, this would need Helmar Decoupage & Craft Paste and using decoupage techniques so I was feeling a little daunted by my idea and messaged Helmar to ask what they thought of my idea, they were very supportive and encouraging, I don't think I would have wound up going through this idea without their encouragement and support.  Another reason why I love Helmar not just because the glues are brilliant but because they are so encouraging of creativity and crafting. 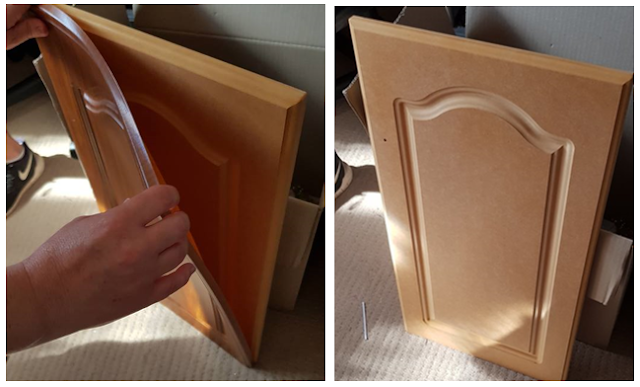 So now that you know how I came to the decision to do such a ambitious project lets get to how I did it.

I watched a lot of decoupage videos including decoupaging with comic books before starting.  I wanted to be sure I knew what I was doing and spent a lot of time trying to find damaged comics as I didn't want to damage a comic that might be valuable to someone.
I had no luck at op-shops looking for damaged comics so I went to my nearest Comic Book Shop and explained what I wanted to do and that I needed comics that wouldn't have value in the future.  He was very helpful and pointed me in the direction to his $2 box which has reprints in it so they will never be of value as they aren't originals and it had comics that were damaged in.
I spent some time on the couch going through my collection and cutting out full pages I loved and sections I loved, I had 3 Wolverine reprints amongst my collection but I found myself unable to cut the story apart so I only took bits from the cover, I know they will never be worth anything but I have loved Wolverine since I was 14 and I just couldn't cut the story up.  I remembered I had some old damaged K-Zone magazines that E bought himself a couple of years ago at the op-shop in a box for a future craft project and grabbed them out and was so happy to see they had some Star Wars, Harry Potter and Spiderman bits in them I could use.  One of the DC comics had a add for Dr Who in it so that meant I could include something Dr Who on my cabinet.

We put some baking paper down on the dining table so I could work at a more suitable height for my back, I started my project with the lids as the needed to fixed more than the doors (I thought), so if I ran out of comics at least it would be done and protected.
I mixed some of my Acrylic paints to get a comic book charcoal black to paint the lids as a base coat under the comics. 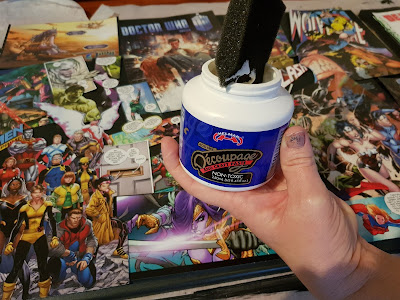 Once the paint was dry I laid out some of my comic pieces to make sure I was happy with how it looked before gluing down. Due to lack of space I did both lids first and planned out my comics with the lids side by side to ensure they flowed but the doors I did individually.
When decoupaging, I worked in small sections, applying the Helmar Decoupage & Craft Paste then putting the comic piece down and smoothing it out, I tried smoothing it out with my sponge brush and with a old credit card, however some of the comics wound up with wrinkles, but I didn't mind the effect as it added to the loved feel of the comic pieces.

I was having issues with the foam in the brushes I was using breaking down rapidly and leaving particles in my finished project.  I changed to the Universal Crafts foam brushes from Craftonline, I only used one brush for the front doors, washed it to then paint the sides and the foam is still in great condition, whereas the other brand I went through 4 brushes on the lids.

It seems to be the paper type they used.  All up I had 4 brands of comics and 2 of them just wouldn't smooth out properly, a third wasn't too bad but still not great.   They would be smooth and perfect when they went down but as they were drying they were wrinkling up.  It was odd.  Someone suggested it may even be the ink used but I think it is the paper as some pieces from Kzone were great and some wrinkled and that has different papers throughout it. 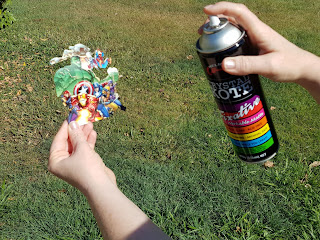 What I noticed about the pieces that took to being decoupaged really well got me thinking that for the doors I would try spraying my pieces with Helmar Krystal Kote Fixative Spray to protect them from wrinkling.  Craft is a experiment and about learning after all.

So I took my pieces for the doors outside and a box to spray into in case of wind and set about coating them all with Helmar Krystal Kote Fixative before Lucas was due over to help me with the doors.


After doing the smaller door I found I was having less issues with the paper wrinkling as it dried so for the big door I decided to give the pieces another good coat of  Helmar Krystal Kote Fixative Spray  This really did help, the big door has the best finish. 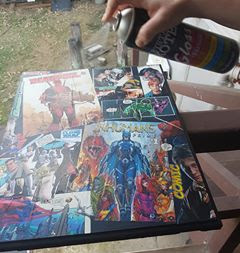 After decoupaging each lid/door I gave them 3 coats of Helmar Decoupage & Craft Paste to protect it and decided when it was done I would give the whole project a coat of Helmar Krystal Kote Gloss Varnish.
I wasn't up to doing the stairs so did it on the back landing and the wind blew the fumes inside the house so my advice is don't do it next to a open window or door.  :) 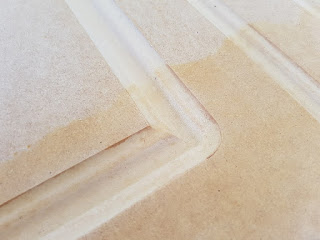 When working on the last door I noticed that the MDF at the bottom 4 inches had mold through it so I treated the entire door with vinegar, gave it a extra coat of paint and made the decision to use the Helmar Krystal Kote Gloss to seal the bottom of the doors so the mold spores would hopefully remain sealed in.

Here are some close ups.  I love how the Helmar Krystal Kote Gloss gave the project a beautiful gloss finish. 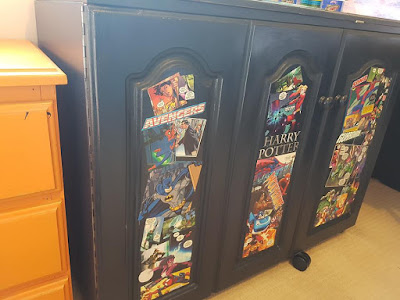 I was unable to get the laminate off the sides so I have given the sides and the trim between the lids and the doors a coat of paint.  When I have 2 helpers who can lift the entire cupboard downstairs for me I will coat the entire cupboard in Helmar Krystal Kote Gloss  to seal the spores but hopefully the paint and vinegar treatment will be enough.


I love how this project turned out.
I know that using Helmar means this project will stand up much better to the high use it is going to get. 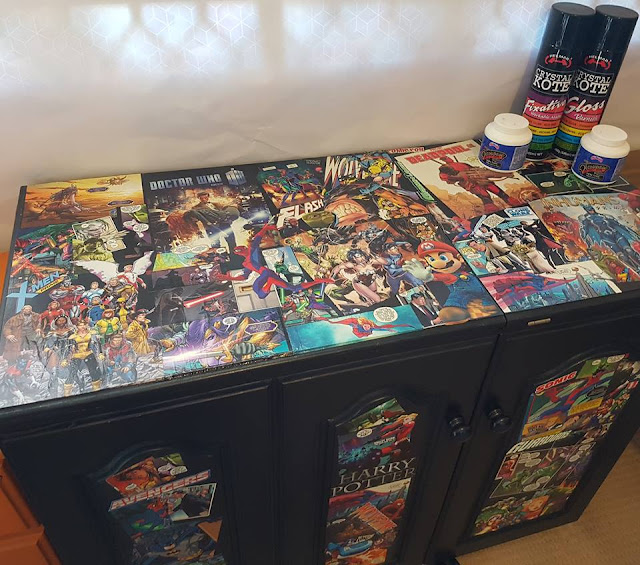 I am so glad Helmar supported my idea of tackling such a big project.  I learnt some very useful things while doing it and it is a very fun piece in our craft room.

Posted by dyspraxic organised scrapper at 15:00