Mr E asked that Ezra Bridger from Star Wars Rebels Season 1 be his first cosplay that he makes himself.  As we are novices to sewing and prop making we decided that we should start with the easiest part of the costume first.

Before starting we did some research online including reading  blog, joining the Replica Prop Forum and asking a member of the 501st for hints; he told us to add CRL to our search when searching for info on any Star Wars cosplay, I am so grateful for that hint but the reason I am grateful will be revealed in a later post as it isn't about the gloves. 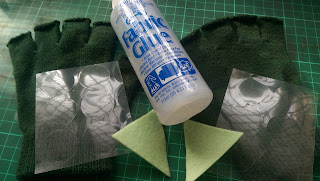 As this is E's first time making a costume we wanted to keep it simple but also have it be a journey in learning skills he will need to make other costumes, so we chose the gloves as a starting point as he could make them very simply with some Green Fingerless Gloves from Best & Less and add a triangle of Light Green Felt glued to the back of them with Helmar Fabric Glue.


I used some scrap packaging inside the gloves in case the glue went through the fabric, though the glue did not go through which was good, I would still take this precaution if doing it again. 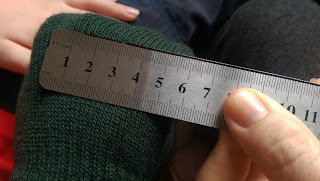 To get a approximate idea of the approximate size the triangle of felt needed to be.
I cut a triangle to this size and then trimmed down as needed. 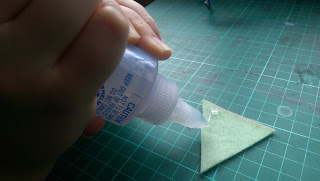 E applied the Helmar Fabric Glue to the underside of each triangle.
A 2 handed job due to his hand issues but a good way to help build his hand strength.  I love it when a craft supply is useful for his Occupational Therapy.

He set the gloves aside to let the glue dry.

And here are the finished gloves.
He is so happy with how they turned out. 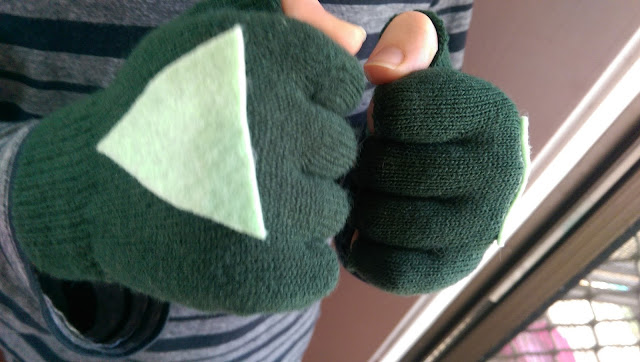 This was a great way to get him crafting for his costume without feeling overwhelmed.

Next project is Ezra's jacket.
Posted by dyspraxic organised scrapper at 11:48