I decided earlier this year to create more fun in our lives.  At first I thought about doing themed days for their educational, cultural and awareness raising value, I also realised making the decorations and food could be great for fine motor skill and sensory activities for myself and the boys.
With this in mind I have been trying to think of themed things we could do and Dr Who is just perfect for this need, and we could get 3 days out of it.  Dr Who Day could be the season premiere, the anniversary aka my Granddaughter's birthday and Boxing Day (our favourite Dr Who Day each year).  So I picked out a few ideas that would be things myself or the boys could do and one thing I have wanted for a long time is a Weeping Angel decoration so I decided to make a Weeping Angel decoration that could either stand on the table or be a tree topper.
I found a few tutorials online for converting a barbie into a Weeping Angel and I asked my friend that lives in the town that has my closest Kmart to pick up one of their $4 barbies for me when he was next in Kmart, as I couldn't get to the op-shop at the time.  About a hour later he sent me pics so I could choose one.
All the tutorials either melted the elbows and wrists or used hot glue, I didn't want to melt plastic as this releases toxic chemicals into the environment and I prefer using Helmar glues over hot glue as I tend to get glue all over me when I craft and Helmar doesn't burn.  So I planned out what glues I would try for which part and set to work once my friend dropped off my $4 knock off barbie.

I decided to try using the doll's hair to create the Angel's hair instead of the method used in all the tutorials and absolutely love the finished look, it was certainly much easier than the other method.
I simply put her hair into a ponytail at the right spot on her head (her original style was too high), then I wound the hair around into a bun shape and gluing with fabric glue as I went.  I finished it off by trimming the hair and using fabric glue to kind of seal the shape where it was trimmed.  I thought that once it was painted you wouldn't be able to tell.
I finished it off by adding a skinny ribbon around her head with Helmar Fabric Glue.

Now for the arms I simply cut them at the elbow with a stanley knife and glued them at a right angle using Quick Dry 450, as the edges don't meet very well I let it have a long drying time and then used some polymer clay to fill in gaps and sort of stabilise the joint.
I didn't need to do anything to the wrists as the plastic is a soft plastic so her wrists and fingers were bendy and a small amount of glue where the fingers need to attach was all that was needed.

For the dress I started by making a cardstock cone, I simply wrapped some cardstock around at her waist into a cone shape, glued it at the seam with Helmar 450 Quick Dry Adhesive as that is what was on my desk and open.  And then trimmed the base of the cardstock level with her feet.
I then cut some white tulle and cut head and arm slits in it.  Put this over her and tied some ribbon around her waist.  I added in sections of tulle to cover her cardstock base.
I eventually realised that because I had bought Pewter Paint not Stone or Granite the tulle would show as tulle so after putting her wings on I added some gauze by selectively gluing pieces over her and then tieing another skinny ribbon around her waist.

For the wings I used some 1mm white craft foam.  I cut a rough angel win shape and drew in the feathers on both sides with a embossing stylus.
I also cut 2 small bits for the tops of the wings.  I glued these onto the base with Helmar Foam Glue, and let dry.
I attached the wings to the doll with Helmar 450 Quick Dry Adhesive. 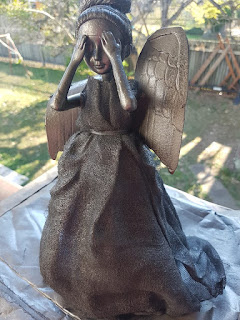 I took her outside and spray painted her with the Pewter Paint, taking her upstairs to dry on the railing of my back landing.


I love how she turned out and because I used Helmar I know she will last.

Check out how cool she looked on my Dr Who themed table. 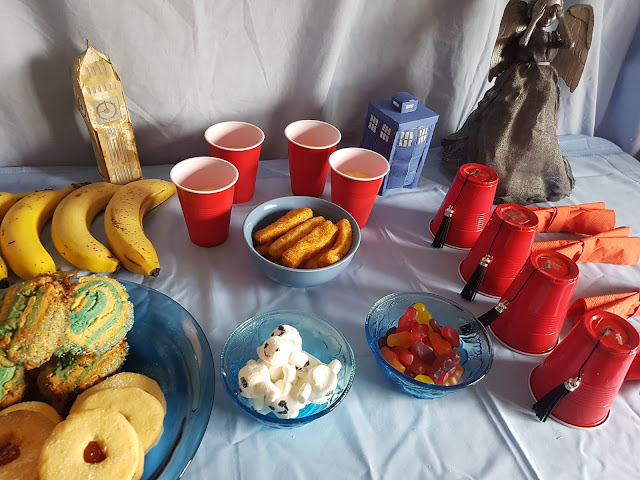 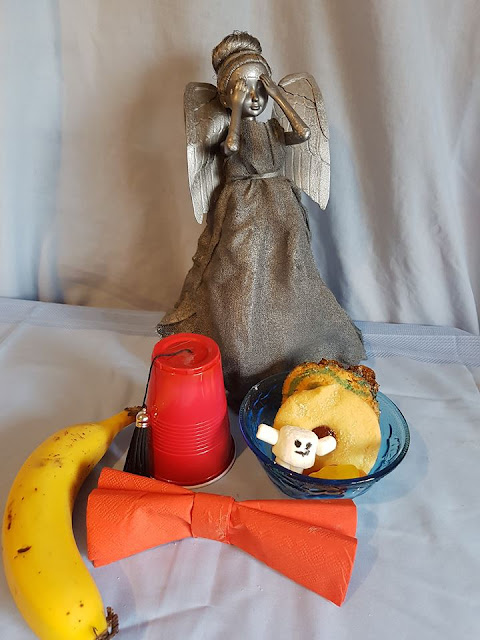 Posted by dyspraxic organised scrapper at 15:00